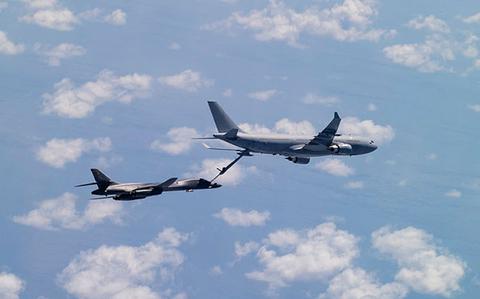 The B-1B Lancer bombers flew 3,700 miles from Diego Garcia in the Indian Ocean for drills at Royal Australian Air Force Base Darwin in the Northern Territory, Australia’s Department of Defence said in a statement Tuesday.

The drill allowed U.S. and Australian aviators to work together in challenging conditions, Air Commodore Stephen Chappell, director general of Australia’s Air and Space Operations Centre, said in the statement.

The B-1B is the backbone of America’s long-range bomber force and can carry a conventional payload of up to 37.4 tons of guided and unguided ordnance.

Australian aviators trained with B-1B crews on Guam in 2020, according to the Australian statement.

The B-1Bs rendezvoused over the Timor Sea with two Australian tankers, which transferred fuel to them at an altitude of 30,000 feet, according to the statement. Expect to see more in future...