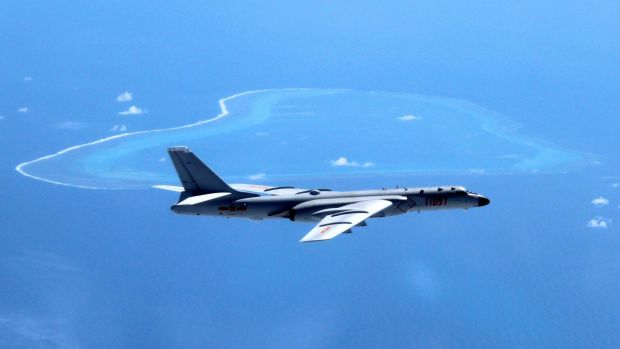 Chinese bombers will be able to strike Australia from new artificial islands in the South China Sea as part of a major military modernisation that has also prompted calls for Australia to develop a ballistic missile shield.

Chinese H-6K long-range bombers can more easily target bases in the Northern Territory and even installations such as Pine Gap and Harold E. Holt naval communications station outside Exmouth by flying from 3000-metre runways being built in the Spratly Islands, senior analysts warn.

Fears will be heightened further after Chinese air force chief Ma Xiaotian​ announced on Friday China is developing a long-range bomber that will improve its ability to strike far from home.

Former national security adviser Andrew Shearer said China's rapidly improving ballistic missiles bolstered the case for Australia to "get much more serious" about missile defence, including a land-based shield similar to US Patriot missiles or the high-altitude systems being used by Japan and South Korea.

"The strategic purpose of the ADF for the future will be to protect Australia as a base for long-range allied operations," Dr Fruehling said.

Alan Dupont, chief executive of the security consultancy the Cognoscenti Group, said: "We are a redoubt or a sanctuary if you like for the US. China's strategy, I have no doubt, is to prevent any increased use of Australian facilities by the US."

Dr Davis agreed: "China is not going to permit this without responding."

Former Defence official and now head of Strategy International, Ross Babbage, said the US had limited basing options in Asia. "As a consequence, the Chinese know damned well they can target these facilities and do a lot of damage in the early hours of a clash. That could include, and many people think would include, some places in Australia."