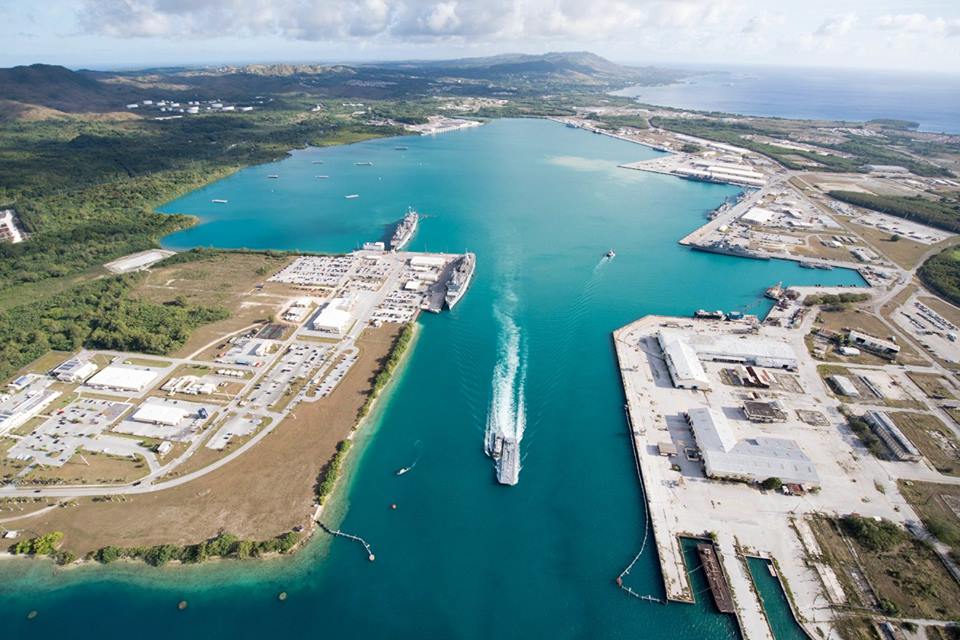 At remote ranges in northern Australia this summer, US Marines and Australian troops trained to guide US bombers to targets on far-flung islands, illustrating the Corps’ increasing focus on a potential war in the Pacific.

In August, Marines flew RQ-21A Blackjack drones in Australia for the first time as part of the month-long Exercise Loobye.

During the exercise, US B-1 bombers from Guam and B-2s out of Diego Garcia flew as far as 4,000 miles to the Delamere, Bradshaw, and Mount Bundley training areas in northern Australia, simulating long-range precision strikes. The bombers were supported by tankers flying out of Okinawa.

RQ-21s flew over the ranges to gather information before and after the airstrikes.

“We’ve done an awful lot with the US Marine Corps,” Houston said. “They basically are the only nation that really gets a chance to routinely mount an exercise invasion of Australia, and that relationship … has served us incredibly well.”

Killerbots, guided by Pine Gap, same as any other weapon?

As Alice Springs hosts a military base that is intimately involved in remote warfare, Pine Gap, residents here have more than the usual stake in a debate unfolding far beyond our horizons – whether to ban or how to control Lethal Autonomous Weapons Systems, as the United Nations has dubbed them, or “killer robots” in popular parlance.

These are close to becoming a reality. The design capabilities being developed for driverless cars and AI-driven cameras are also being used for developing killer machines.

An Australian Airforce conference last year heard about nano-explosives with 10 times the force of conventional explosives that can be mounted as warheads on small drones. These drones can be manufactured in a 3D-printing process – tens of thousands a day with only 100 printers is already possible. The US and Chinese militaries are already working on launching large numbers in minutes, the conference was told.

The decision, in the conflict zone, of what to hit and what to avoid will have been programmed in at the design stage. Deployment and targeting will still be human-directed. It is the targeting function that makes the Joint Defence Facility Pine Gap relevant, as it is already, and has for a long time been, a key provider of targeting data to piloted and remotely piloted (no-one on board) weaponised airforce assets. As such, JDFPG is part of Australian and US weapons systems and is controversially involved in drone strikes in countries with which Australia is not at war.

“Machines with the power and discretion to take lives without human involvement are politically unacceptable, morally repugnant and should be prohibited by international law,” - Secretary-General of the United Nations, António Guterres. 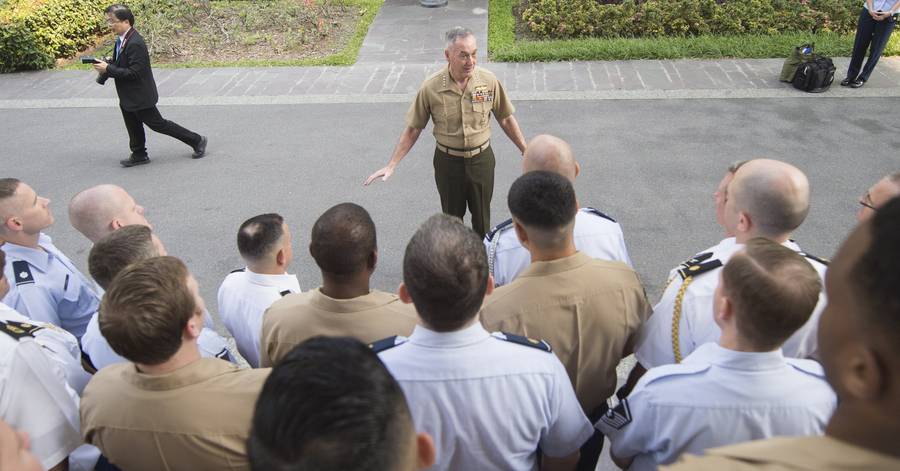 The Pentagon is considering plans to send heavily armed, versatile Marine Corps task forces to East Asia, curtailing some deployments in the Middle East as it repositions forces in response to growing Chinese influence.

In a related step, the Marine Corps next month will expand the number of Marines who serve in rotating training assignments in Darwin, Australia, military officials said. About 1,250 Marines now deploy in Darwin for six months each year; the number will increase by an unspecified amount in March, officials said.

Over the past week, Gen. Dunford visited Australia, which faces its own strategic challenges with China, and toured the training base for U.S. Marines in Darwin. He also visited Thailand, now rebuilding ties to the U.S. after strains that followed a 2014 military coup.

With Donald Trump in power, Australia urgently needs to re-evaluate its US bases 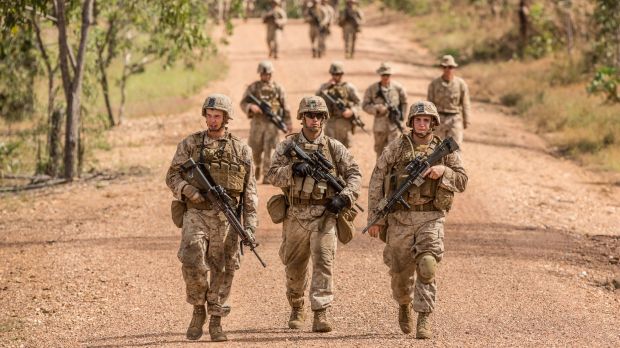 Recent changes to the US National Security Council should be ringing loud alarm bells in Canberra.

By demoting the highest-ranking military officer and the highest-ranking intelligence officer, and appointing political adviser Stephen Bannon as a permanent member of the NSC, Donald Trump has seriously escalated the risk of the US launching into ill-advised conflicts. Bannon comes from a role as chairman of the racist, Islamophobic website Breitbart.com, and is reported as having been in charge of writing the recent executive order that has banned US entry for refugees and citizens from seven Muslim-majority nations.

It is no secret that Australian foreign policy and defence forces are closely enmeshed with the US. Since Trump has taken office he has loudly proclaimed an "America first" foreign policy, and his Secretary of State, Rex Tillerson, talks of denying China access to artificial islands in the South China Sea. Any such blockade is likely to be seen by the Chinese as an act of war.

Malcolm Turnbull's meek response to the immigration executive order does not inspire confidence that he will stand up to the US.

Historically Australia's foreign policy has also leaned towards "America first", with little differentiation between our ally's interests and our own. In rushing to join the coalition going into Iraq, the thought that Australia may be better off not invading another country on the basis of dubious intelligence was overlooked. Indeed, in the Vietnam War, the CIA knew the war was unwinnable, even before Australia sent troops. Malcolm Fraser, defence minister at the time, was livid when he discovered this many years later. A total of 521 Australian troops died in Vietnam and about 3000 were wounded.

Since World War II, Australia has joined in more US wars than any other ally. With Canberra's current "business as usual" agenda, Australia is at high-risk of joining future US wars that will likely create further humanitarian disasters and undermine our security.

Simultaneously there is talk of expanding US bases in the region. What is Australia going to say when the US asks to increase its bases on our soil? Are we willing to make Australia a target? CIA documents from the 1980s released this month revealed authorities expected the Pine Gap spy base near Alice Springs to be attacked in the event of a US-Soviet nuclear fight.

Australia has US marines based in Darwin, multiple surveillance bases and about 40 senior Australian Army officers working in US Pacific Command. This includes an Australian Army Major-General serving as the deputy commanding general – operations, US Army Pacific. This intense enmeshment reinforces Australia's past behaviour; when the US goes to war, we have little option but to follow. With the US building up its military bases around China, American threats of blockades in the South China Sea are reckless and provocative. A war between China and the US is not in Australia's interests or anyone's interests.

Another example of US influence has been Australia's behaviour at recent UN talks regarding the nuclear weapons ban treaty. Australia has acted as US proxy in trying to thwart these negotiations. So much so that the Australian delegation was dubbed the chief of the "weasel states". Despite Australia's efforts, negotiations for a treaty will go ahead this year. Australia has not committed to participating, which calls into question our government's commitment to the UN.

Australia urgently needs to re-evaluate its American bases and promote steps that defuse rather than intensify regional tensions. Having senior Australian defence personnel integrated into the US defence force hinders Australia acting independently. Do we want Australia to be capable of making strategic decisions in the national interest? New Zealand clearly acts in its own interest and remains an ally.

With Trump now the new US Commander-in-Chief, is it wise that we allow ourselves to be so automatically tied to American foreign policy? War in our region would be a humanitarian catastrophe for all involved.

Margaret Beavis is a Melbourne GP and president of the Medical Association for Prevention of War.