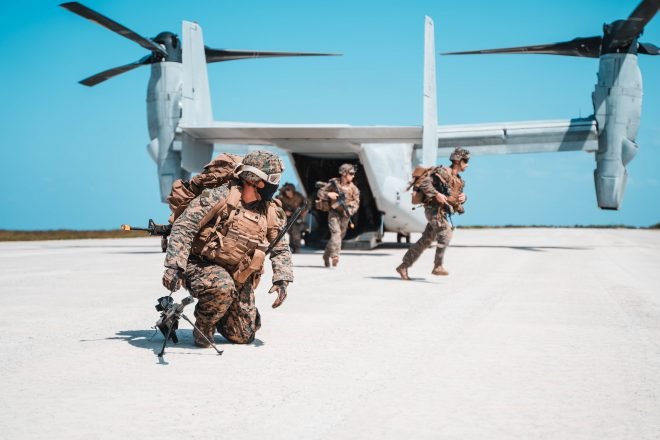 As the Marine Corps reorganizes to prepare for a potential conflict with China, the service is considering three new Marine Littoral Regiments for its campaign of land warfare in the Indo-Pacific.
The service is shedding its heavier equipment so it can operate between expeditionary bases on islands in the Pacific to support the fleet. Part of the force design initiative is standing up a new unit, known as a Marine Littoral Regiment, which will likely have 1,800 to 2,000 sailors and Marines. The unit will feature a Littoral Combat Team, a Littoral Anti-Air Battalion and a Littoral Logistics Battalion.

Brig. Gen. Benjamin Watson, the commanding general of the Marine Corps Warfighting Lab, recently said the service plans to have the first regiment, which will be based in Hawaii, reach initial operational capability in Fiscal Year 2023.

“There has been discussion of creating as many as three in the Pacific between now and 2030 and they would be forward-based in the Pacific, although they might – depending on the experimentation that we do – they might be rotational in terms of how we source some of the people that man these Marine Littoral Regiments,” Watson said last week at the National Defense Industrial Association’s virtual expeditionary warfare conference.

“And then based on their – where they’re home-based in the Pacific, elements would rotate on a regular basis further west,” he continued. “So working with allies and partners so that we persistently have a presence from each of the Marine Littoral Regiments out there in the western Pacific.”