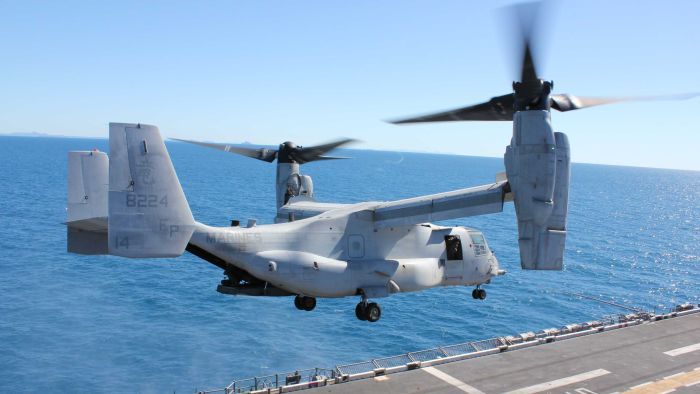 America has allocated more than quarter of a billion dollars for Osprey aircraft infrastructure in Northern Australia.

The US Defence Department is looking to spend $305.9 million on facilities for their Osprey fleet, Chief Minister Michael Gunner told NT Parliament on Wednesday, while knocking back a suggestion that the money would be spent on a new naval base in Darwin.

"The budget appropriation that is being sought in America is for ramps for the Ospreys in the Northern Territory, not for a naval installation," Mr Gunner said.

"The Ospreys are aircraft vehicles. That is where the money is intended to go."

In July, the ABC revealed that a draft US Congressional bill had $US211.5 million allocated for new "Navy Military Construction" in Darwin, with few other details available.

Mr Gunner said that following these reports, he had reached out to US Secretary of Navy Richard Spencer, to clarify the nature of the spending.

The ABC understands plans for a new commercial port facility were still being discussed. 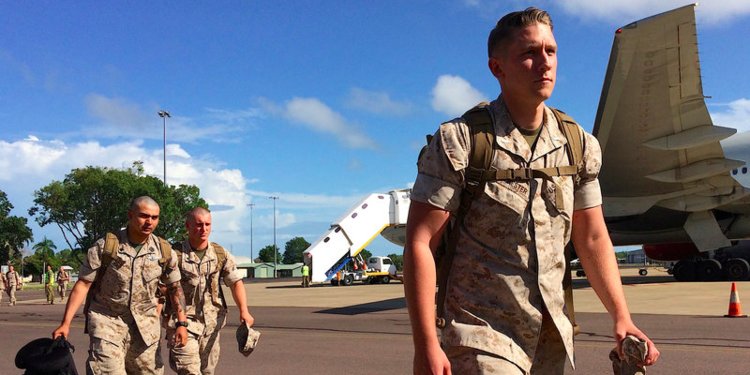 The US military is considering investing more than $211 million into construction in Darwin, Australia, according to the Senate's version of the annual defense legislation.

What that money will build is unknown. The Marine and Navy officials Marine Corps Times reached out to have yet to provide a statement.

Australian outlet ABC News reported that secret planning is underway to develop a new commercial port just outside of Darwin that could eventually be developed to house Australia's landing helicopter dock ships or the US amphibious assault ships that ferry Marines around the globe.

While Australia is one of America's most important military allies in the Pacific, the military construction could cause diplomatic headaches for Australia and sour its relationship with China, which over the years has become more economically intertwined.

"...even our best allies, the Australians, they're with us from a military perspective, but economically they're tied to China," Maj. Gen. Daniel Yoo, the commander of the Marine Raiders, told Marine Corps Times in an interview during a May special operations conference in Tampa, Florida.

"And so they have a problem internal to their own country as far as there's some that feel they should be closer to China, because their economic health is dependent upon it."

Congress may review the Corps' plan to redistribute its forces across the Pacific.

Report: Darwin’s Glyde Point may house new base for US Marines

The ABC is reporting senior defence and federal government officials conceded the proposal may anger China even though it would be built as an industrial port.

However if approved it could eventually accommodate “large amphibious warships” such as landing helicopter docks and US military ships.

The ABC said it approached the Defence Department and the US Embassy in Canberra for comment, but both are yet to respond to detailed questions on timing and costs.

In a statement, the department said “Defence has no plans for the development of a new naval facility in the Northern Territory” while the US embassy declined to comment.

The NT Government says it is unaware of any plans for a US war base in Darwin.

In his first official visit to Darwin in May, US Ambassador to Australia Arthur Culvahouse said US relations to Australia were expected to build in the coming years.

Gunn Point Rd recently underwent $38 million upgrades which saw the resealing of the 35km stretch of road as well as resealing of Murrumujuk Rd. 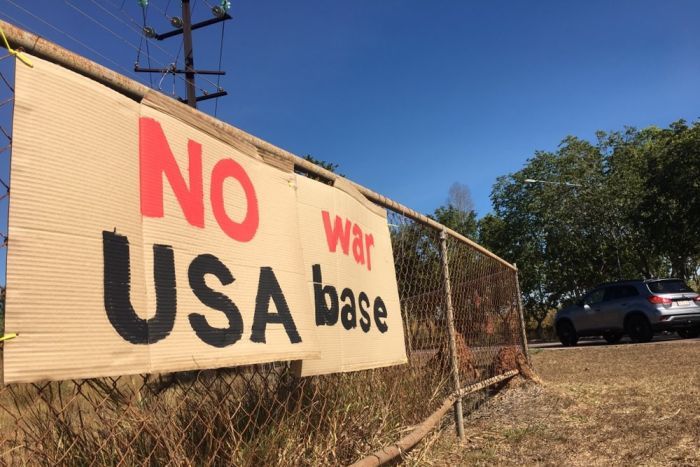 Days prior to the revelation that a new port which could be used by the US Marines was being planned on the edge of Darwin, a placard popped up on one of the city's main commuter arteries.

"No USA war base" blared the letters of the sign hanging off the Bagot Road pedestrian bridge, which neighbours land owned by Australia's Defence Department.

Other similarly slapdash carboard banners were also erected along the street.

Their appearance signalled that some within the tropical capital may have been aware of the impending news — and perhaps the rest of the region's residents shouldn't have been too surprised.

While nothing has yet been declared through official government or Defence channels, the signs of such a development have long existed.

Whether or not the NT will see more foreign boots on the ground, the ADF has been steadily improving and upgrading defence infrastructure in and around Darwin in recent years — a fact which falls somewhat contradictory to the reality that ADF numbers have been on a steady decline in Darwin for the past decade.

Secret plans for new port outside Darwin to accommodate US Marines 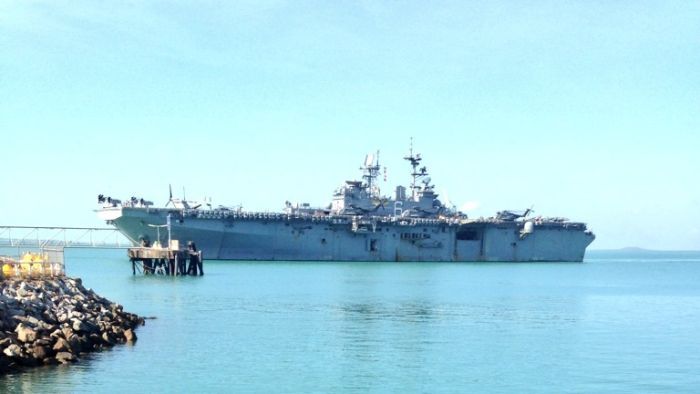 Secret planning has begun for a new port facility just outside Darwin which could eventually help US Marines operate more readily in the Indo-Pacific.

Precise details remain tightly guarded but senior defence and federal government figures concede the proposal may risk angering China even though it's a commercial port, not a new military base.

Multiple officials, speaking on the condition of anonymity, have confirmed to the ABC the multi-use development would be in the Glyde Point area, roughly 40 kilometres north-east of Darwin's existing port.

Darwin port, which was controversially leased to a Chinese company in 2015, has existing defence facilities such as a multi-user barge ramp, but the new proposed facility would have the additional advantages of being less busy and less visible.

If approved, the new port could eventually be able to accommodate large amphibious warships such as Australia's Landing Helicopter Docks, and American vessels such as the USS Wasp, which recently arrived in Sydney.

Strategic experts believe a new deep-water port would be ideally suited for the more than 2,000 US Marines and their equipment during regular rotations through the Top End.

"The Americans are clearly not withdrawing from the Indo-Pacific, whether it's because of their strategic competition with China or more generally," said Rory Medcalf from the Australian National University.

It's understood a formal announcement on the new maritime facility could be made as early as next month when the "Talisman Sabre" war games with the US begin in the Northern Territory and Queensland.