Defence in 'emergency' talks with USA over Darwin port sale 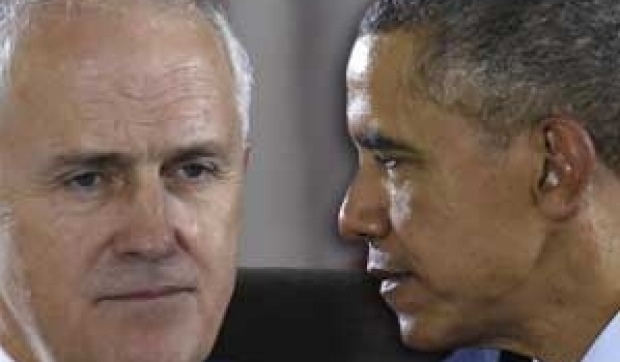 Pentagon officials have flown to Australia to for "emergency talks"
to express their frustration over the Port of Darwin sale
and Canberra's reluctance to stand up to Beijing.

Last year, the port hosted 102 naval vessels, according to its annual report, and was the point of arrival for US Marines on rotation through Darwin. Pentagon officials now want assurances from Australia on security arrangements at the port and better systems to ensure the breakdown in communication doesn't happen again.

The US officials also expressed concerns over Australia's lack of interest in sending naval ships to join Washington's so-called "freedom of navigation" operations in the South China Sea. 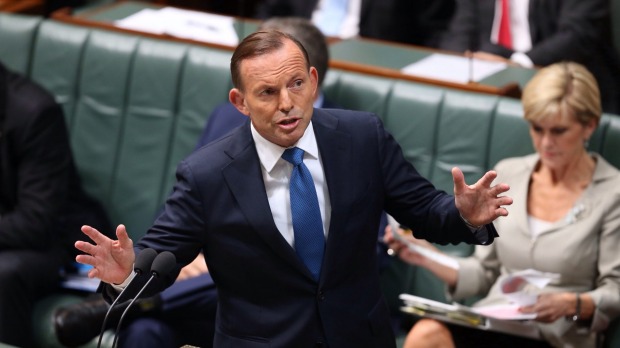 The Abbott government pushed for Washington to request that Australia expand its air strikes against the Islamic State terror group from Iraq to its more dangerous neighbour Syria, Fairfax Media has learnt.

Government sources say it was Mr Obama who raised Syria as a topic and then made the first suggestion of Australia's expanded role.

But it is widely known in government circles that Mr Abbott has long been keen to do more in the fight against the Islamic State, which has taken swaths of territory stretching across Syria and Iraq and established affiliates in Libya, Egypt and Saudi Arabia.

from humanitarian air drops to begging master to let us off the leash, in 12 months. 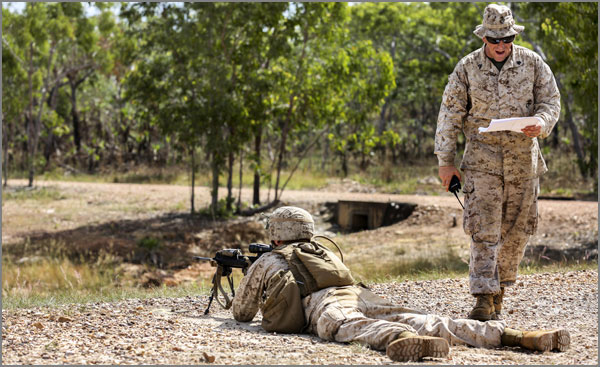 Last week US assistant defence secretary David Shear announced to a Congressional hearing that the United States would soon be basing B-1 Lancer bombers and surveillance aircraft in Australia as a deterrent to China’s “destabilising effect” in the South China Sea.

This move is, in fact, part of the USA’s pre-existing “pivot to Asia” strategy, which aims to gradually emplace a blockade on China, so the USA can strangle China economically by closing off its trade routes, affecting its ability to import oil from the Middle East or elsewhere by sea.

Australia is being upgraded as a US operated base for this purpose.

Australia has a “force posture agreement” with the USA that allows “enhanced aircraft cooperation initiatives.” It has already had heavy bombers (B-52s) deployed in Australia, though the justification at this stage is that these have only been “visits” for exercises and training.

For the US Defence forces it is apparently OK to inform their own Congress about their plans for further deployment of military forces before informing the government of one of their most obviously obsequious colonies of their intentions.

However, the Chinese government almost immediately issued a statement expressing “serious concern”, declaring it would “resolutely uphold its territorial sovereignty” and warning the United States to “talk and act cautiously and not take any actions that are risky or provocative”.

Following the Chinese reaction, the Australian Prime Minister Abbott and his Defence Minister Andrews were soon claiming that the US government had contacted them to advise that the official had “misspoke” and as far as the PM understood, “the US does not have any plans to base those aircraft in Australia.”

Abbott’s statement betrays the real relationship between Australia and the United States – Abbott “understands” the Americans have no “plans” at present for basing aircraft in Australia, but there is no independent Australian view on the matter.

Contrast this with the government view on refugees and immigration...

Why is China building a great wall of sand? 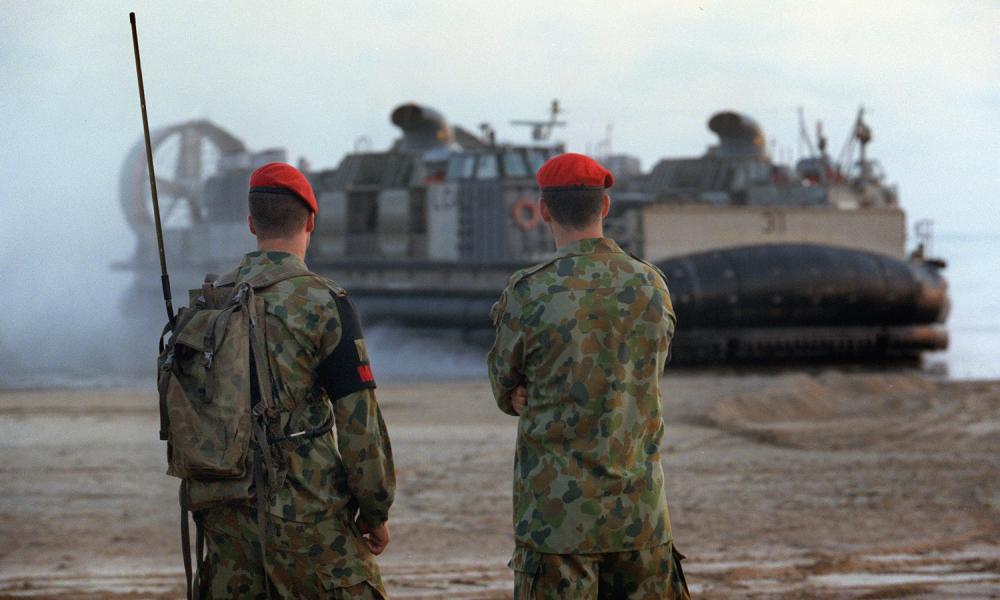 It is unsurprising that Australians are only vaguely aware that the first ever permanent peacetime deployment of foreign troops in the nation’s history is now occurring. The yarns spun by our politicians portray the deployment, which will swell to at least 2,500 marines over the next few years, as doing all things for all people. To our wary southeast Asian neighbours, the rotation is presented as a humanitarian aid and disaster relief operation, ready to spring into action at the first whiff of a meteorological event. Nationally, it is downplayed as a mere “troop rotation” and “interoperability” exercise, an end in itself with no greater military implication. Locally, an upsurge in jobs servicing the American troops is promised, as too is an influx of foreign currency to be spent on entertainment, infrastructure and tourism. Recent news of Chinese military construction in the South China Sea is troubling, but in the context of the unprecedented American regional military expansion that has been occurring for years it is unsurprising. If the Australian government desires to dampen regional tensions, and seek a path different from unquestioning support for the US in a zero-sum confrontation with China, an honest dialogue on how our foreign policy supports the national interest must be undertaken. While the nature and purpose of the Darwin marine rotation remains obscured, the prospects for this are bleak.

relationship with USA comes at a price 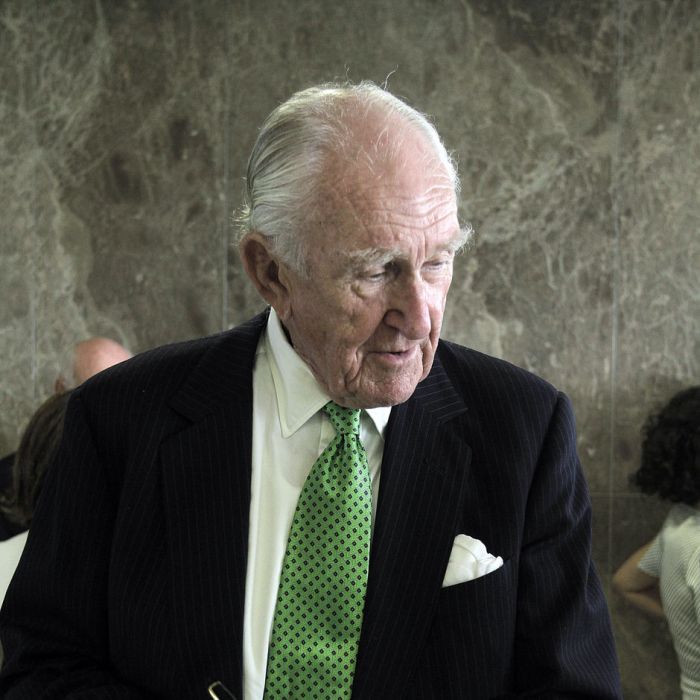 Mr Fraser said the larger question before Australians right now is what the country's future will be. The former prime minister's recent book, Dangerous Allies, which won this year's John Button literary prize for political commentary, argues that Australia's close relationship with the United States could lead to conflict with China. "How many politicians talk about that in a realistic sense? There's no direct threat to Australia. We do not need to be a frightened nation," Mr Fraser told AM. "You know, if America goes to war with China because Japan does something stupid – which is the most likely scenario – Australia, at the moment, on current policy settings, does not have the capacity to say 'No'," he said. But Mr Fraser said the situation was no different under the Rudd or Gillard governments. "You can't pick much difference between the political parties," he said.

Julie Bishop said, 'We're going to stand up to China'. What are we standing up to China about? We don't have an argument with China unless they create one.